Hiroaki Hirata
Kyousuke Hori (堀 京介, Hori Kyōsuke?) is the husband of Yuriko Hori and the wandering father of Kyouko Hori and Souta Hori who is often absent from home due to work.

Kyōsuke is a handsome man with shoulder-length dirty gray hair, golden-brown eyes (as seen from Chapter 26.5 Pg. 1 in color) and he normally puts on a tired look.

Although he puts on a serious face, only for a joke and a big chesty laugh to follow. At first noted by Izumi Miyamura to look like Souta Hori where Izumi says that "Souta became huge".

According to Kyouko Hori, Kyousuke is a rude, selfish and forceful man who jokes around on serious topics and has a knack to leave for long periods of time. He is also cheap, as when he was asked by his family to eat Beluga Caviar or Sharks's Fin Soup, he flatly denied them. He seems to be able to shift between moods quickly, as when he was sleeping before being visited by Izumi Miyamura, at the sight of him Kyousuke's tired demeanor changed to a happy one instantly.

Yuriko is Kyōsuke's wife whom he met in high school.

Kyouko is Kyōsuke's daughter who acts cold towards him and she doesn't mind physically hurting her father as she performs an axe kick on him when Kyousuke tried to act cool in front of Izumi Miyamura. Later on, when Kyousuke asks Hori to prepare him some food, she comes back with a bowl of soup and purposely jams it into the back of his head. He then apologized to Miyamura for Hori's "crazy domestic violence habits".

When Kyousuke first met Miyamura, he intimidated him, but he soon become fond of him as Kyousuke finds Miyamura interesting and accepts him into the family quickly. He sees Miyamura as his future son-in-law and trusts that he'll take good care of Hori, but Kyousuke tends to ask him random questions which usually pertain to Hori.

Kyousuke and Kyouko Hori in the Vol. 4 cover 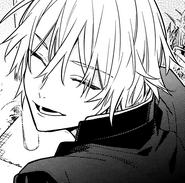 Highschool Kyousuke talking to Yuriko Hori
Add a photo to this gallery
Retrieved from "https://horimiya.fandom.com/wiki/Kyousuke_Hori?oldid=12302"
Community content is available under CC-BY-SA unless otherwise noted.