Nobunaga Shimazaki
Kakeru Sengoku (仙石 翔, Sengoku Kakeru) is the charismatic president of the student council of Katagiri Senior High School who is enrolled in class 3-3, the childhood friend of Kyouko Hori and the boyfriend of Remi Ayasaki.

Sengoku is a slim pale-skinned young man with smooth red hair that is parted towards the right side where it completely covers both his ears and red eyes.

He is almost always seen wearing a sweater over his school uniform, occasionally taking it off or wearing his blazer. Due to his skinny figure, he usually needs to wear multiple layers of clothing to appear of a healthier weight. This, along with his unusually high voice, makes him appear somewhat feminine.

Sengoku is a rather shy boy who gets embarrassed easily and he is a very wimpy where the slightest thing will make him cower in fear, especially things to do with horror or insects. Sengoku is very smart and serious, normally ranked #1 in the school (and #2 in phys ed). He enjoys reading and has an incredible level of concentration while doing so, the point of ignoring everything else going around him.

He is generally not very expressive with his emotions. The sole exception is his anger or irritation, which he shows all the time as he is the Student Councils President. Even though he makes threats and gets angry towards those breaking the rules, he doesn't actually like doing so.

Sengoku is very insecure when it comes to his body. Thinking his slender body is embarrassing and always refusing to show it in various occasions, even going as far as to make up extravagant lies to get out of it. He wears multiple layers of clothing to hide his body type.

Although seemingly opposites, their mutual interest in books drew them together. They began dating when they were freshmen, and their relationship has continued ever since. They are deeply in love. Sengoku will go to great lengths to protect Ayasaki, generally from the advances of Yasuda. Sengoku and Ayasaki will sometimes get into fights over trivial things, such as how cool a certain bug is or which kind of food is better. However, they usually make up pretty quickly. Sengoku is also terrified of Ayasaki's bug collection, and never goes over to her house.

He is very good friends with Kouno, Sengoku, and Ayasaki are frequently together. Whenever Sengoku and Ayasaki have a fight, it's usually Kouno who helps reconcile the couple. Sengoku also thinks of Kouno as very reliable, and, along with Ayasaki, is one of the few people he calls by their first name. In contrast to Kouno's worrying about dieting, Sengoku wants to gain weight, and usually reacts poorly any time Kouno talks about it.

Sengoku and Hori are childhood friends, due to the friendship between their parents. As a result of Sengoku's cowardice, along with Hori's aggressiveness, Hori tended to push around Sengoku. They were almost always together during elementary and junior high school, to the point where most people thought they were dating, though both of them vehemently denied this. When choosing high schools, Sengoku specially chose Katagiri, thinking that Hori was going to attend Yasaka, and that he could finally be free of her. He was mistaken.

In high school, they continued to be friends. However, the bullying aspect of their relationship mostly disappeared, as both of them dated other people and weren't together as much. However, since their group of friends is the same, they're often together, and act normally towards each other. However, if the 2 of them are left alone, or interacting in a 1-on-1 manner, Sengoku will go back to being afraid of Hori.

Due to Miyamura's airheaded personality, he tends to be very clingy to Sengoku, which in turn irritiates Sengoku. Fortunately, Miyamura is unaffected by his irritation, and Sengoku doesn't really hate it, and so both are fine with continuing it. Sengoku is generally more lenient with Miyamura, and is slower to anger with him. They also share a commonality in their weight, sometimes have contests about which one is heavier (Miyamura usually wins). Sengoku is also very puzzled about why Miyamura hides his body (he does not know about the tattoos), and has tried a variety of techniques to find out.

Due to the difference in their personalities, Sengoku and Iura are generally at odds with one another. Iura's loudness annoys Sengoku, and Sengoku is quickest to anger when Iura's involved. To counteract this, Iura often uses Yanagi as a middleman for his jokes and pranks, knowing that Sengoku won't get angry at him. Despite all this, Sengoku still considers Iura a friend, even though he would never openly say it to him.

Segoku wants to be closer to Yanagi. However, due to his lack of expressiveness about his emotions/friendships, along with the way Yanagi feels distant, this has been a slow process.

Sengoku sees Ishikawa as the reliable one in the group. He also usually relies on him to keep Iura under control. However, even Ishikawa is not free from Sengoku's irritability, and was even extremely hostile towards him when he thought Ishikawa was molesting Yanagi. All in all, Ishikawa is probably the one who Sengoku could call a friend the easiest.

Kakeru is in many ways similar to Takeru, and have a cordial relationship. Neither of them are very expressive about their emotions and both are pretty quiet, so they don't talk a lot. However, they both play the online game, and often chat with each other in it. Kakeru has kept the fact that he is dating Ayasaki a secret from his parents, only revealing it after they graduated. It was also Takeru who taught Kakeru, from a very young age, to be wary of Hori's family.

Kozue is rather forceful towards Kakeru, often times lying or ordering him to do things he doesn't want to do, like let her cut his hair or take his picture. Also, in order to maintain her dignity as his mother, Kozue hides her delinquent past from him. Kakeru and Kozue voices sound almost identical, and even their own family can't usually tell them apart. 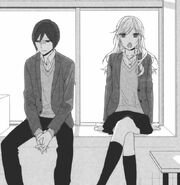 Kakeru with Remi and Sakura Kouno
Add a photo to this gallery
Retrieved from "https://horimiya.fandom.com/wiki/Kakeru_Sengoku?oldid=11817"
Community content is available under CC-BY-SA unless otherwise noted.