The anime consists of thirteen episodes collected into a total of seven Blu-ray & DVD volumes, with the first volume released on February 24, 2021.[4]

Admired at school for her friendly attitude and academic achievements, high school student Kyouko Hori has been hiding another side of herself. With her parents often away from home due to work, Hori also has to look after her younger brother and do the housework, leaving no opportunities to make friends and socialize outside of school. Meanwhile, Izumi Miyamura is seen as a brooding, glasses-wearing, otaku. In reality, he is a gentle person hopeless at studying. He also has nine piercings hidden behind his long hair and a tattoo along his back and left shoulder.

By sheer happenstance, Hori and Miyamura cross paths outside of school—neither looking as the other expects. These seemingly polar opposites become fast friends, sharing with each other a side of themselves they have never shown to anyone else.[2]

Please see the associated Image Gallery for a more comprehensive list of media related to the anime. 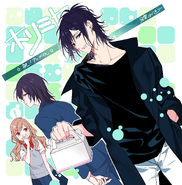 Special Illustration by Fujita, author of Wotakoi: Love Is Hard for Otaku

Community content is available under CC-BY-SA unless otherwise noted.
Advertisement