Website
Twitter
Daisuke Hagiwara (萩原ダイスケ, Hagiwara Daisuke?) is the artist of the ongoing Horimiya manga series serialized in Monthly GFantasy and works alongside HERO, the writer. The manga is a spin-off of HERO's webcomic, Hori-san to Miyamura-kun.

On the Volume 1 cover of Horimiya, Daisuke Hagiwara wrote a message stating:

Beginning October 2011, Daisuke Hagiwara started collaborating with HERO on a spin-off of HERO's romcom Hori-san to Miyamura-kun webcomic, titled Horimiya. She worked as the artist, while HERO continued writing the story. The manga is currently serialized in the GFantasy magazine, published by Square Enix. Later on, Yen Press licensed the story in English. Currently, the series has fifteen volumes.

In 2013, she published a oneshot titled Dog and My Family Circumstance (と私の家族事情, Inu to Watashi no Kazoku Jijō?) and did both the story and artwork. The oneshot was serialized in Sylph.

In 2017, Daisuke Hagiwara began working with writer Shizuku Totono as the illustrator of the romantic comedy NE NE NE (ねねね, Ne ne ne?), alternatively titled NEN NE NO NENE. The manga ran in Gangan Comics for one volume and was released in English by Yen Press in 2018.[4]

Back to the Jack 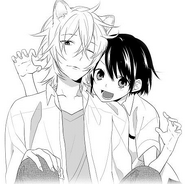 Dog and My Family Circumstance

Community content is available under CC-BY-SA unless otherwise noted.
Advertisement